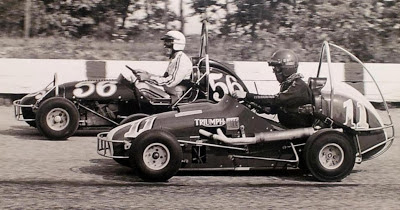 We are finally back with a new old photo, delayed due to the effects of Hurricane Sandy.

This photo is from a race track not far from the hard-hit areas along the Jersey shore: Fort Dix Speedway, which today is a dirt track named New Egypt Speedway but which was a paved track when this photo was taken in the late 1960s. The track is on Route 539 in Ocean County, not quite 20 miles inland from the storm’s oceanfront devastation.

In the photo are Bobby Courtwright, in the Ted Seiz Crosley #56, and Ben Trimble, in the Jon Fick Triumph #11. The shot is turn one at Fort Dix, on the original – and very abrasive – paved surface before the track was re-paved and enlarged in the early 1970s.

Bobby Courtwright has been gone for many years now, but Ben Trimble is alive and well at age 85, and is an active participant with the Vintage Club, as is the #11.
Email ThisBlogThis!Share to TwitterShare to FacebookShare to Pinterest
Newer Post Older Post Home
What Does TQ mean? It means three-quarter, as in three-quarter midget.