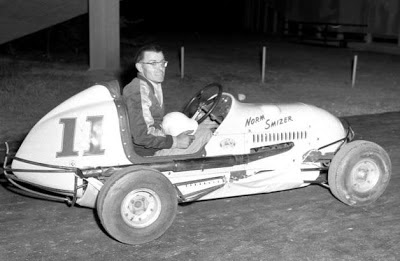 Shown in his TQ Midget more than 50 years ago is Norm Smizer, one of the founding fathers of the ATQMRA and the organization’s first president. We are posting this picture this week because Smizer will be remembered at the ATQMRA banquet this Sunday, November 18.

At the banquet the Vintage Club will be presenting the Norm Smizer Preservation Award. The award will be presented to an individual who by his efforts and actions exemplified the Vintage Club’s goals of documenting, preserving, and displaying the history of TQ Midget racing. The award is named in memory of Norm Smizer in recognition of Smizer’s dedication, his craftsmanship, and his inspiring personal story.

In addition to being a driver, Smizer was a skilled craftsman and a talented engine builder. When he was no longer driving, he built engines for others, including four-time ATQMRA champion Doug Craig. But it is nothing short of inspirational to realize that the greatest of Smizer’s achievements as a engine builder came following the loss of his eyesight due to complications from cataract surgery in 1967. Terming his blindness as no more than "an inconvenience," Smizer continuing building engines – engines which won countless races and numerous championships.

But Norm Smizer will not be the only ATQMRA pioneer whom we recall at the banquet. The Vintage Club will also be presenting the Dick Marlow Participation Award, named in memory of the founder of Pine Brook Stadium and the ATQMRA’s first full-time traveling announcer. This award will be presented to teams who demonstrated outstanding participation and support of Vintage Club events during 2012.

Two additional awards are named in honor of individuals who are still very much with us. The Jim English Sportsmanship Award, named in honor of one of the finest gentlemen you’ll meet, will be presented to an individual who exemplifies amiability, a spirit of camaraderie and a positive attitude towards the Vintage Club and it's members.

The Robert Noll Service Appreciation Award is named in honor of auto racing's most dignified and dedicated supporter, and it will be presented to an individual whose efforts exceeded expectations for the betterment of the Vintage Club.

The banquet is this Sunday, November 18.
Email ThisBlogThis!Share to TwitterShare to FacebookShare to Pinterest
Newer Post Older Post Home
What Does TQ mean? It means three-quarter, as in three-quarter midget.