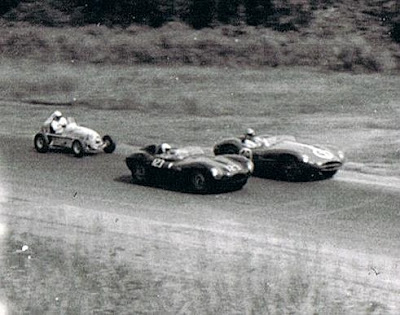 This photo from 1959 depicts one of the most famous races ever run, a race which many call the best race ever run.  Why is it here?  We’ll tell you after we tell you the story of the race.

In July of 1959 the Lime Rock Park road course in Connecticut staged what was termed a “Formula Libre” race, what is more colloquially referred to as “Run Whatcha Brung.”  A handsome purse was posted, and the event drew Ferraris, Maseratis, Corvettes, and Aston Martins, and included cars that had run and won in Formula One races.

Also there was the Kurtis-Kraft Midget shown in this photo.

The entry list contained a Who’s Who of drivers of the day, George Constantine, Pedro Rodriguez, John Fitch, Lance Reventlow and Chuck Daigh among them.

And that year’s Indy 500 winner Rodger Ward, driving the Midget.

The day’s activities consisted of two 20-lap heats and a 60-lap main event.  Ward trailed in the first heat, but with a few changes to the car he managed to win the second heat by a comfortable margin.  Then the fun began.

In the 60-lapper – more than 90 miles on the twisty Lime Rock circuit – Ward kept himself in a position to win while the fuel load burned off, then, with 15 laps remaining, he turned up the wick.  He passed Daigh for the lead and won overall, thrilling the crowd and creating a racing story that quickly swept across the nation and the globe.

But why is this here?

Because active with the Vintage Club these days is Ken Brenn, the gentleman who owned the car driven by Ward on that historic day nearly 60 years ago.

Ken Brenn has a long list of accomplishments in racing, but one of his lesser-known contributions is that he is the contractor who paved Pine Brook Stadium in 1962.  Today Ken Brenn is a great supporter of vintage racing, from TQs to Indy Cars.  He is the man who, with Rodger Ward and a then-11-year-old car, did something in 1959 that today would be called “mind-blowing.”
Email ThisBlogThis!Share to TwitterShare to FacebookShare to Pinterest 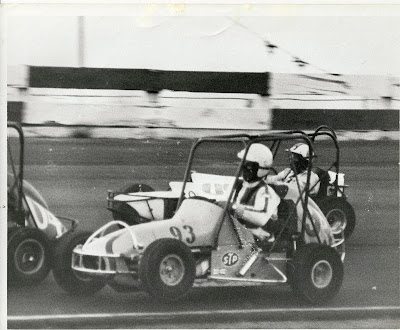 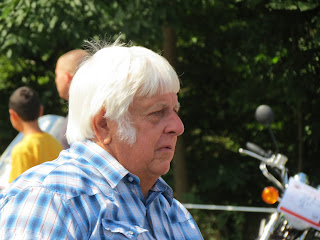 
(As always, click either photo for an enlarged view.)
Email ThisBlogThis!Share to TwitterShare to FacebookShare to Pinterest

A neat photo taken by Ed Smizer at a Vintage Club event at Oswego Speedway in 2013.  Those of us who have been around racing for decades understand the appeal of race cars under the lights as the sun sets and daylight fades... 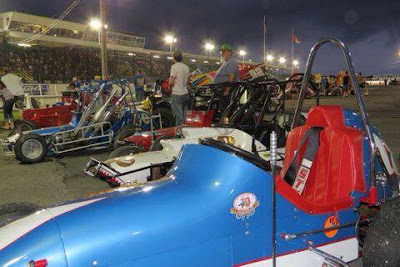