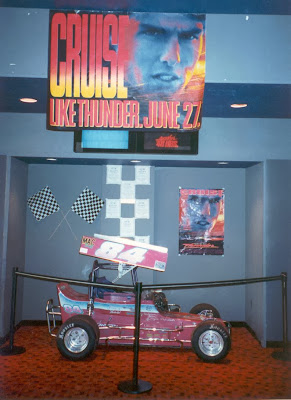 When the Tom Cruise movie Days of Thunder opened on June 27, 1990, Rich Tolerico’s Badger TQ was one of two race cars on display in the lobby of the Blue Star Cinema on Route 22 in Watchung, New Jersey. The other was Larry Brolsma’s stock car, which was far more appropriate for the film but since the theatre manager was a friend of the ATQMRA, a TQ got in the door too.  (Click the photo for an enlarged view.)

Before the movie began a drawing was held to give away tickets to an upcoming race at the Flemington Fairgrounds.  Pine Brook had closed the prior October, and Flemington would be gone in another 12 years.  Today the Blue Star Cinema isn't around, either.

Days of Thunder, by the way, was a movie that got middling reviews at best but which was savaged by Chris Economaki, who gave it one-fifth of one star.  It is perhaps best remembered for this 18-second exchange between Robert Duvall, as the crew chief, and Cruise, as the driver.