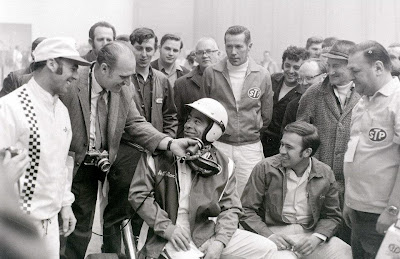 As the racers of the modern ATQMRA get ready to compete in Atlantic City this weekend, we take a look at an Atlantic City victory lane from 42 years ago... January 23, 1971.  Click the photo for an enlarged view.

STP was a contingency sponsor of the indoor races back then, and at the far right is STP representative Art Maxim.  An STP jacket was part of the swag a driver would collect for an Atlantic City win, and Duffy is wearing one... but it has Maxim’s name embroidered on it.  Presumably, a jacket with Duffy’s name would come later.

Next to Maxim and behind Zrinski is Crocky Wright, who would later move to Indiana in protest of wings on Eastern midgets.  In Indiana Wright became an early supporter of a young driver named Tony Stewart, and later, after Stewart had achieved fame and championship success in NASCAR, Stewart quietly saw to Wright’s needs in Crocky’s last years.

Mostly obscured behind Chernokal, and arguably the tallest figure in the photo, is Don Crabtree, himself later a TQ car owner.  Flagman Nick Fornoro, Sr., is at the left.

Finally, this note: The Zrinski car was a roadster, and this was before roll cages.  Duffy is sitting on the car, having simply hoisted himself out of the seat and onto the tail.
Email ThisBlogThis!Share to TwitterShare to FacebookShare to Pinterest 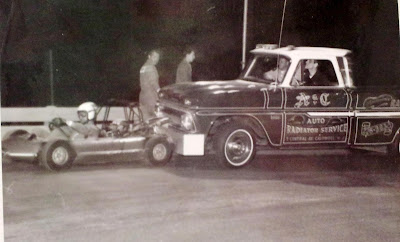 A new photo riddle this week, courtesy of the photo collection of Gary Mondschein.  Gary knows nothing about this car, and neither do we!  Can you help?  (Click the photo for an enlarged view.)

The photo was taken at Pine Brook, of course, circa 1962-63-64.  A&C Radiator provided push truck service at Pine Brook in those years, but we are not certain whether this Chevy truck is a 1962 or later model.  The push truck driver is struggling to see the low-low car!

The car is vaguely reminiscent of Mickey Thompson’s 1963 Indy car, which appears in the photo below.  Could this car have been inspired by Thompson’s car?  (A note of racing trivia:  The tires on Thompson's car were much smaller in diameter than any used at Indianapolis previously, and he had to have them specially-made.) 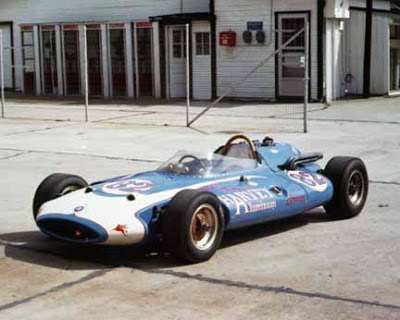 Unfortunately, the Pine Brook photo is grainy to the point that it is difficult to discern any details.  We can tell that the car's driver is certainly very exposed at the forward end of this rear-engine car, and it appears that whatever rollover protection is present is dedicated more toward protecting the engine that the driver!

Do you know anything about this car?  If so please contact us via this link.
Email ThisBlogThis!Share to TwitterShare to FacebookShare to Pinterest 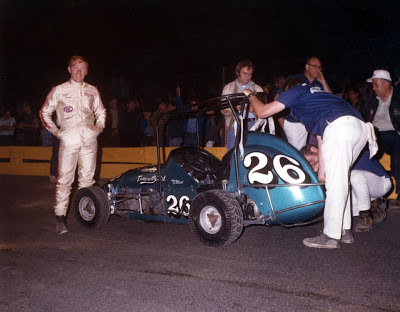 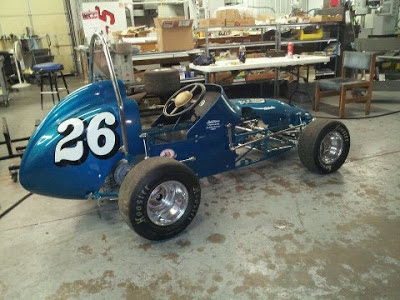 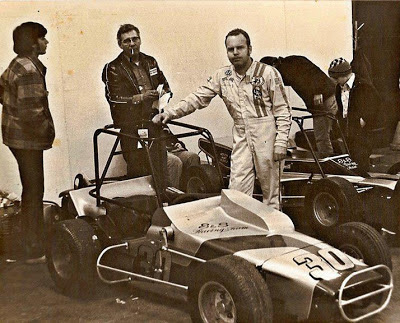 The Arntz name remains active in racing in this region. The next generation – also named Tom – is a regular participant with the Vintage Club.
Email ThisBlogThis!Share to TwitterShare to FacebookShare to Pinterest 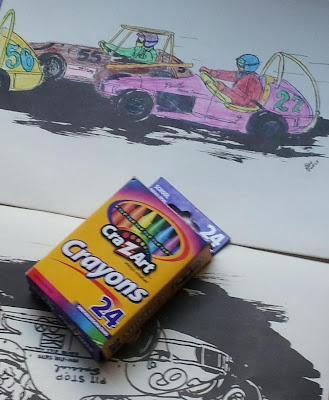 A coloring book, even when illustrating actual people and machines, is today just as it was then a means to allow a child’s imagination to soar.
Email ThisBlogThis!Share to TwitterShare to FacebookShare to Pinterest
Newer Posts Older Posts Home
Subscribe to: Posts (Atom)
What Does TQ mean? It means three-quarter, as in three-quarter midget.