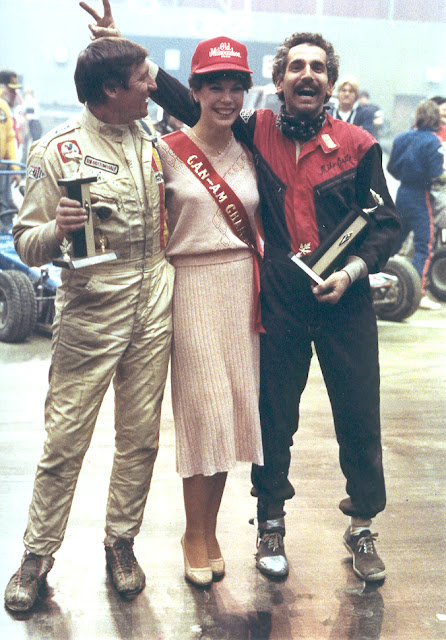 Mike Osite became the 1985 ATQMRA champion and was twice a winner in Niagara Falls. Bentley Warren was already a supermodified champion and a man with two Indy 500s on his resume at this time, and he was every bit as serious about winning in a TQ as he was in any other kind of race car. So when Osite dusted him in the warmups at that first Niagara Falls event, Warren sought out Osite to see who this guy was. The two became fast friends almost instantly – although Warren made sure to claim his own Niagara Falls victory in the fourth race in the series.
Email ThisBlogThis!Share to TwitterShare to FacebookShare to Pinterest

The news came today of the passing of Bob Tidaback.  These days he is perhaps remembered best as the father of current ATQMRA racer Mike Tidaback but he should be remembered for his longstanding devotion to TQ racing and, more importantly, for his gentlemanly conduct.

He was a constant presence at Pine Brook and elsewhere long before Mike began to race, and he always had a smile and a warm greeting for everyone.

In racing, where emotions can run high and opinions can be strongly-held, Bob Tidaback was a rare person who approached all matters with an open mind and who treated the viewpoints of others with respect.

We will long remember him. 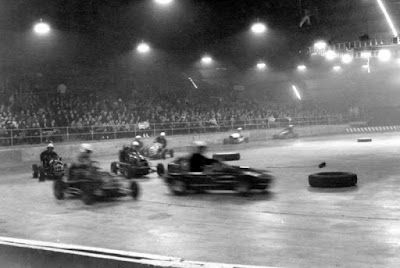 That's a bumper sticker from 1959, advertising that year’s eight-race series of indoor events at the Teaneck Armory.  Click the image for an enlarged view.

The Teaneck Armory was built in 1938 and still stands today, although the National Guard unit assigned to it was disbanded in 1994. ATQMRA races took place in the facility in the years 1952 through 1962.

On the dates listed on the bumper sticker, the following drivers won the feature races: 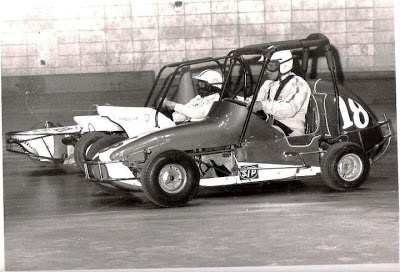 The race made the evening television newscasts in New York and was on the back page of the New York Daily News, but New York was not and is not a racing town, and the spectator count was not enough to justify a return engagement.
Email ThisBlogThis!Share to TwitterShare to FacebookShare to Pinterest

Nearly Back Where it all Began

This weekend the TQ Midgets are racing for the first time in Baltimore, Maryland, indoors at the 1st Mariner Arena. This is perhaps the closest that the TQs have gotten to their roots in more than 60 years.

There is a large, run-down building next to the tracks near Union Station in Washington, D.C., 35 miles from the 1st Mariner Arena. In this building commuters park their cars in the morning and leave in the evening without pausing to take a look around. People walk by without a glance. Train passengers look out the window and think nothing of it. But it holds a signficant place in history... and in racing history.


It was called the Washington Coliseum when the Beatles performed their first U.S. concert here. Concerts, ice hockey, basketball, circuses, political rallies and much more are all a part of the history of the building that first opened as the Uline Arena in 1941. And when the Tom Thumb Midget Association, the organization that evolved to become the ATQMRA, staged its first-ever race, it did so in the Uline Arena.

It was November 20, 1950, when Tony Bonadies won the Tom Thumb Midget Association’s first race, indoors at the Uline Arena.

The building was constructed by Miguel L. Uline for his professional ice hockey team, the Washington Lions. It was built along the tracks leading to Union Station in an area now known as NoMa (North of Massachusetts). Uline Arena was also home to the Washington Capitols of the Basketball Association of America, a team which was coached by Red Auerbach prior to his move to Boston.

But it wasn't until jewelry wholesaler Harry G. Lynn bought the arena in 1959, renamed it the Washington Coliseum, and made it a place for concerts that the place became world famous. That's because the Beatles performed their first U.S. concert there on February 11, 1964. Concerts featuring everyone from the Woody Herman Orchestra to the Royal Ballet to Bob Dylan were presented at the arena.


Newer venues later cut into the arena’s business, and by 1987 there was a planned $17.5 million renovation featuring convention space, a chapel, schools, and radio and TV studios for a faith-based organization. But these plans never same to fruition, and in 1994 the building was converted into, of all things, a trash transfer station.

Finally, following new regulations governing the handling of garbage, the building became the dismal parking garage that it is today.


Through the years there have been an remarkable array of events at the arena, including such diverse uses as an inaugural gala for President Eisenhower in 1953, and as a holding cell for many of the 12,000 people arrested during protests of the Vietnam War in 1971. But now, the only hope for the first race track on which the Tom Thumb TQ Midgets raced is yet another redevelopment plan, which currently is stalled, at best, due to today’s economic conditions.

Perhaps one day the building will be restored to its former glory, since the neighborhood surrounding it is being redeveloped. It happened when Convention Hall in Atlantic City was renovated into Boardwalk Hall. It would be great to see the history of the Uline Arena honored and preserved while moving forward with a 21st century renovation.
Email ThisBlogThis!Share to TwitterShare to FacebookShare to Pinterest
Newer Posts Older Posts Home
Subscribe to: Posts (Atom)
What Does TQ mean? It means three-quarter, as in three-quarter midget.