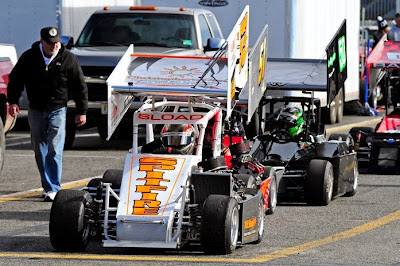 We need your vintage photos!  Help us keep the “Vintage Photo of the Week” going by sending us your pictures and information.  Use this email link – thank you!
Email ThisBlogThis!Share to TwitterShare to FacebookShare to Pinterest

What follows is the text of Bob Marlow's opening remarks at the 2013 combined banquet of the ATQMRA and the ATQMRA Vintage Club: 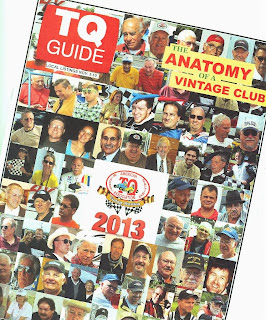 The yearbook has a vintage TV Guide vibe to it this year.  But television can’t compare to racing.

In February, 1973, now almost 41 years ago, I accepted an invitation to go to the Can-Am sanctioned TQ races at the Daytona Memorial Stadium in Florida.  That invitation was extended by Alan Mollot and Ed Enes, about whom you’ll be hearing more later.  Alan and Ed had a state-of-the-art tow rig with which to take Alan’s race car to Florida.... Ed’s two-door Pontiac and Alan’s single-axle open trailer.  There was a toolbox in the trunk of the Pontiac.  What more do you need?

Well, there was a fuel crisis at the time so there was at least one if not more 5-gallon cans of gasoline in the trunk, too.

We left from Ed’s house in the Bronx during a snowstorm.

Why did I go on that trip?  Why not – if I had stayed at home, with snow falling, what would I do, watch television?  The top five TV shows at the time were All in the Family, Sanford and Son, Hawaii Five-O, Maude, and Bridget Loves Bernie.  Yep, Bridget Loves Bernie was a top-rated show.

Well, the week we were in Florida there was also The Mary Tyler Moore Show, Gunsmoke was still on the air, Ironside, Adam 12, or The Flip Wilson Show.  I could have watched Marcus Welby, M.D., The Waltons, The Carol Burnett Show, or even Monday Night Football with Howard Cosell and Dandy Don Meredith.

What wasn’t on TV in those days was racing.  The first start-to-finish Daytona 500 on television didn’t happen until 1979, the Indy 500 was shown on an edited tape-delay basis, and aside from the occasional race segment on ABC’s Wide World of Sports, there was virtually no racing on television.

The Partridge Family or Barnaby Jones weren’t going to keep me home when there was a race to go to, just slightly more than 1,000 miles from my home.  Alan, Ed and myself had a very memorable trip.  We wouldn’t remember a thing about any of those TV shows had we watched them.

Racing creates memories.  The Vintage Club is all about keeping those memories alive.
Email ThisBlogThis!Share to TwitterShare to FacebookShare to Pinterest
Newer Posts Older Posts Home
Subscribe to: Posts (Atom)
What Does TQ mean? It means three-quarter, as in three-quarter midget.