Joe Macfarlan of 3WidesPictureVault.com grabbed this shot of Ray Evernham (right) pointing out a detail on his Modified to Wally Dallenbach, Senior (left) and Wally Dallenbach, Junior (center) at Wall Stadium's Turkey Derby this past Saturday. 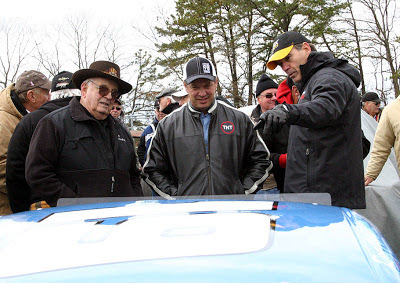 What does this have to do with the ATQMRA? Plenty.

Ray Evernham, of course, achieved national fame as a championship-winning crew chief for Jeff Gordon in NASCAR, and then shepherded the re-introduction of the Dodge brand to NASCAR racing. But as most people in our region know, Evernham got his start in racing in the stock cars at Wall Stadium.

Wally Dallenbach, Sr., got his start on the short tracks of New Jersey before making it to the Indy 500, where he competed on 13 occasions with a best finish of fourth in both 1976 and 1977. Before Indy, Dallenbach raced not only at Wall Stadium but at long-gone tracks such as Old Bridge, and he raced both stock cars and open-cockpit cars. After retiring from competition, the senior Dallenbach forged a solid reputation as the Chief Steward for the Indy cars under the CART banner.

But what these two gentlemen also have in common is that they raced with the ATQMRA, Dallenbach in the early 1960s and Evernham in the late 1980s.

Both men were on hand at Wall Stadium for the unveiling of the restored XL-1 Modified, which Evernham resuscitated because of the memories he had of watching Dallenbach and others race the car. It was quite an event, with a huge throng gathered around, and once the car was revealed Dallenbach couldn’t take his eyes off it. We saw him more than once simply touch the car with his fingers, as if to confirm that it was really there.

The photo below is beautifully evocative, as Dallenbach, wearing his signature hat, took some slow laps around Wall Stadium in the restored car. 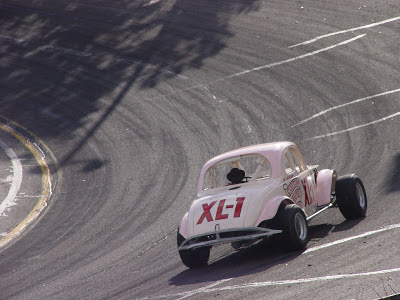