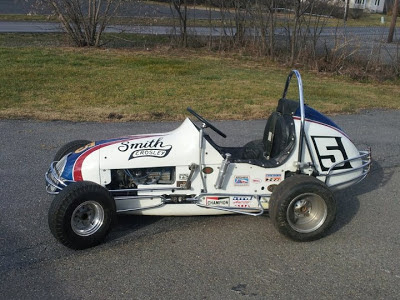 This car should be considered to be the first vintage TQ.

It’s not the oldest car, but to our knowledge it is the first ATQMRA car to be restored following its retirement from active competition. It has appeared in the restored condition shown in this photo for well over 20 years.

The "Smith Crosley," as lettered on the hood, was campaigned by New Jersey-based owner Charlie Smith, with a variety of top drivers at the wheel through the years. It raced, and won, both with a roll bar as seen here, and with a roll cage fitted when cages became mandatory.

When it was retired from the track it was acquired by Pennsylvanian Jay Young, who restored it to the configuration shown and who still owns the car today. Young has participated with the car in Vintage Club events, but long prior to the formation of the Vintage Club in 2011 Young displayed the car as part of many vintage racing activities.

Back when the annual midwinter "Motorsports" show was still being conducted at the Valley Forge Convention Center, prior to outgrowing that facility, this restored car was part of a "then and now" display in the ATQMRA booth – that’s how long this car has been a restored classic.
Email ThisBlogThis!Share to TwitterShare to FacebookShare to Pinterest
Newer Post Older Post Home
What Does TQ mean? It means three-quarter, as in three-quarter midget.