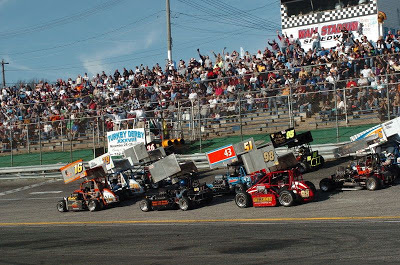 But with the ATQMRA's annual appearance at Wall Stadium's "Turkey Derby" upon us, it seemed appropriate to post this Ace Lane photo from last year's event.  The Turkey Derby is an ATQMRA tradition that goes back 35 years.

While for many years the TQs were relegated to a supporting role on Friday, since Cliff Krause has taken over the management of the speedway the ATQMRA has enjoyed a starring role on Saturday, in the sunshine before an overflow crowd.  Mr Krause loves the speed and the competitiveness of the TQs, and he has continued and enhanced the ATQMRA's long history at the track.  The ATQMRA has raced every year at Wall Stadium for well over 50 years!

If, however, you think that there is not enough "Vintage" in this photo, just remember that the 2011 race pictured was won by the oldest driver in the field.  Robin Johnston, who himself dates back to the mid-1950s, bested all the young 'uns last year!
Email ThisBlogThis!Share to TwitterShare to FacebookShare to Pinterest
Newer Post Older Post Home
What Does TQ mean? It means three-quarter, as in three-quarter midget.