Jim Smith sent along this photo from the awards banquet this past Sunday, and as you can see, combining the banquets of the contemporary ATQMRA and the Vintage Club resulted in a full house! 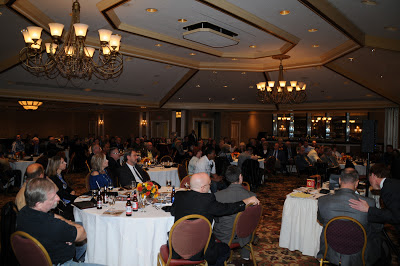 It was cool too, to acknowledge the pioneers of TQ racing while at the same time honoring the young drivers of today.  Ryan Tidman repeated as ATQMRA champion for 2012, driving a car owned by Lenny and Donna Boyd.  Lenny's father, was a top car owner in the ATQMRA decades ago, and Lenny himself is a past TQ and Midget champion.

Jim Hempfill, who owns the restored car that was campaigned by Lenny's father, was on hand, making another connection between the past and the present.

A.J. Fuge was named the 2012 Rookie of the Year, in the presence of retired greats such as Hank Rogers, Jr., and Jim Maguire.  Mike Casario received the Vintage Club's Norm Smizer Preservation Award, with Norm's son, Ed Smizer, making the presentation.

There is a long unbroken line between the ATQMRA of a half-century ago and the ATQMRA of today.
Email ThisBlogThis!Share to TwitterShare to FacebookShare to Pinterest
Newer Post Older Post Home
What Does TQ mean? It means three-quarter, as in three-quarter midget.