The Riddle is Solved (Mostly)

A few weeks ago we posted this photo, identifying it as containing a puzzle. 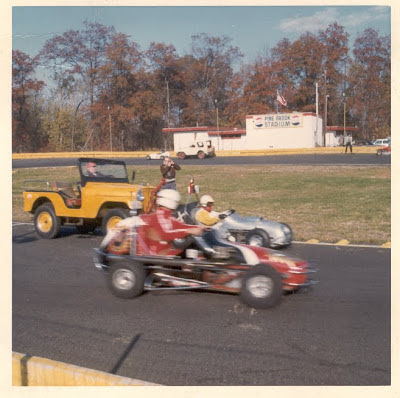 The puzzle in our original post concerned the silver car. It was brand-new on that October afternoon at Pine Brook in 1967 when the photo was taken, and it was unpainted, with a masking-tape "X" for a number. At best it made only a limited number of laps in warmups and it did not race. Most significantly, and why we were interested all these years later, it was front wheel drive.

We asked, who built it? Who owned it? Who was the driver on this day? What became of it?

We have the vaguest recollection that Joe Kidd may have been in it that day.

He remembers the story behind the car having never appeared again. Apparently, the car was somewhat controversial within the ranks of the ATQMRA. Jon Fick had been inspired by the front wheel drive Indy cars and perhaps also by the recent introduction of General Motors’ Oldsmobile Toronado, but the ATQMRA was not prepared to embrace the concept. There was talk of banning the car. Jon Fick, annoyed by this, took the car home, pushed it into the back of the shop, and that was that.

Years later, the car changed hands, but it still never again appeared on-track. It’s final fate, after parts had been harvested from it, was burial!
Email ThisBlogThis!Share to TwitterShare to FacebookShare to Pinterest
Newer Post Older Post Home
What Does TQ mean? It means three-quarter, as in three-quarter midget.