Greece is the Word!

TQVintage.com is viewed around the world and as a result we have received this photograph of a vintage TQ Midget... in Greece! 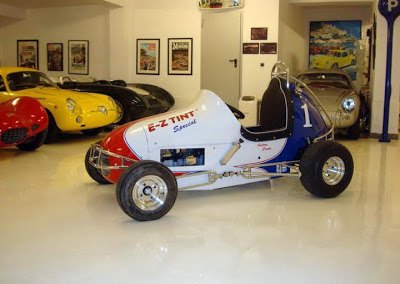 Constantin Sourelis of Evnia Automobiles, a collector-car broker in Switzerland, contacted us regarding a 1960 TQ that he is offering for sale on behalf of a client in Greece.

The car is fully restored and appears beautiful in all details, but in our view is optimistically priced at €24,000 (24,000 Euros). At the moment that this is written, the Euro-to-Dollar conversion makes that $31,500. Plus shipping. Yikes.  Update 1/18/13:  The seller has revised the price to a much more realistic and attractive US$16,000, including shipping to the US!

The car was built in 1960 in Florida by a racer named J.W. Payne, and was raced at the Florida City Speedway near Homestead, as well as at tracks in or near Jacksonville, Hialeah, and Palm Beach through at least 1966. After passing through several owners and suffering several periods of neglect, the car was given a high-dollar restoration in 1996.

It was not an ATQMRA-legal car, it ran on an alcohol-nitro mix with twin Dellorto carburetors and has a number of details that were perfectly legal in Florida TQ racing but which did not conform to ATQMRA rules. Not that we care today – all vintage TQs are welcome in the Vintage Club.

It is not clear how the car came to be in Greece, but Greece is where it is.

The sale of the car includes extensive documentation in two large files, with period photographs and even home movie footage – which can be seen here on Youtube. The photo below of J.W. Payne winning a race shows a sister car, Payne built three cars in all. 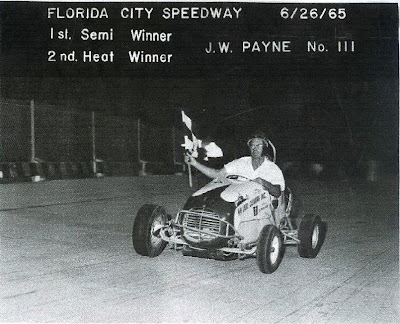 The car can be seen on the Evnia Automobiles web site, just scroll down a bit past the Bentleys and the Jaguars to find the TQ.
Email ThisBlogThis!Share to TwitterShare to FacebookShare to Pinterest
Newer Post Older Post Home
What Does TQ mean? It means three-quarter, as in three-quarter midget.