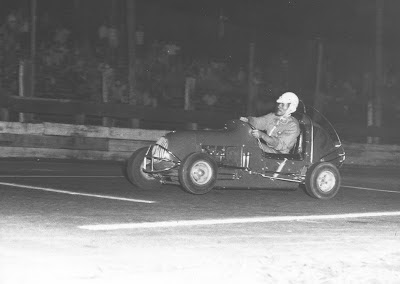 We are posting this photo because the race was run on the fifth-mile infield track at Old Bridge, New Jersey, and Vintage Club members will have their cars on display this weekend as part of the annual Old Bridge Stadium Speedway Weekend.

It was a 20-lap feature that night more than 50 years ago, one of four late-summer ATQMRA dates at Old Bridge that year. Eisenhower qualified the Bob Pouleson 7o7 – the original 7o7, not the later roadster that many of us still remember – by winning the consolation race after failing to qualify through the heat races. Eisenhower took the lead on the twelfth lap and led Tex Enright and Jerry Wall under the checkered flag.

Today's drivers may not know what that lever is, outside the cockpit, on which Eisenhower has his left hand. That’s the brake lever, these cars did not have foot brakes. Also, down low alongside the cockpit is a nearly-vertical cylinder, which is the fuel pump. The fuel tank was pressurized by manually pumping this pump. Pressurized gas tanks... these cars were rolling bombs!

Eisenhower is wearing a loose-fitting uniform, likely not even remotely fire-resistant but certainly better than the T-shirts we see in many old racing photos. His goggles are hanging around his neck because – hard to see unless you click the photo to enlarge it – his helmet has a clear shield.

Eisenhower would win at Old Bridge again in August, again doing so by qualifying through the consi. Trailing Eisenhower to that second victory was George Sweeten, followed by Lloyd Mullin.
Email ThisBlogThis!Share to TwitterShare to FacebookShare to Pinterest
Newer Post Older Post Home
What Does TQ mean? It means three-quarter, as in three-quarter midget.