Mr Zip and the Boss 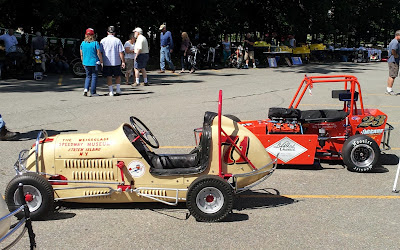 Here is a study in racing evolution.

At the recent Warren Township Car Show, the vintage #71 is shown alongside the brand-new #23.

The vintage car is well-known to followers of ATQMRA racing as being the car of the late Bruno Brackey, perhaps the winningest postman in all of racing. The car dates back to the 1950s and Brackey continued to race it into the early 1980s!

The new car is well-known to followers of ARDC racing by its number, 23, which has long been associated with car owner and former ARDC president Ray McCabe. The new car is to be piloted by longtime McCabe driver and past ARDC champion Phil DiMario.

(One of the first things that McCabe noticed when he got involved with TQ racing was how little fuel the cars consume. TQ racing should be considered "green!")


On the side of the #71 is a picture of "Mr Zip," the Postal Service character for the promotion of ZIP Codes. On the side of the #23 is a line from Bruce Springsteen. The always-smiling Bruno Brackey was indeed Mr Zip on the speedways, and the equally-cheerful Phil DiMario hopes that the new car proves in fact to be "born to run!"
Email ThisBlogThis!Share to TwitterShare to FacebookShare to Pinterest
Newer Post Older Post Home
What Does TQ mean? It means three-quarter, as in three-quarter midget.