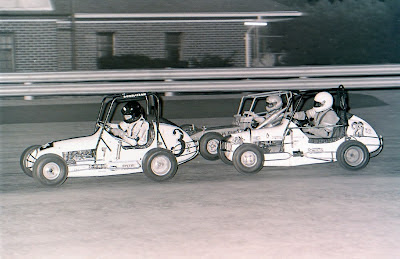 Driving car #3k at Hershey Stadium in 1981 is Len Krautheim, who probably liked the tow to Hershey from his Pennsylvania home a lot more than the trips to Pine Brook, Islip, and elsewhere.

Krautheim spent a relatively short time racing in the ATQMRA -- only a season or two -- then went on to find success in the Central Pennsylvania sprint car ranks.

Chasing Krautheim in the #29er is Glen Rittenhouse, and coming around the outside is Mark King.  As with most of the photos we feature on this page, click the photo for an enlarged view.
Email ThisBlogThis!Share to TwitterShare to FacebookShare to Pinterest
Newer Post Older Post Home
What Does TQ mean? It means three-quarter, as in three-quarter midget.