Under simply perfect weather conditions on September 23, Karl Mondschein and Bill Force Jr each took top honors at Mountain Speedway, Mondschein by winning the feature race for the roll bar class and Force for leading the roll cage cars to the checkered flag, all under the auspices of the Vintage Club.

Driving the DeMasco #18 in the roll bar class, Mondschein grabbed the lead at the start with Drew Fornoro in pursuit in the Wehrle #02. With Mondschein leading Fornoro raced for second place with Bill Force Sr, at the wheel of his own #26. When the engine in the #02 faltered, Force grabbed second place and Keith Majka moved into third position. At the finish it was Mondschein, Force, and Majka, with Fornoro finishing in fourth position and Mark Sasso completing the top five.

In the roll cage class Mike Trimble was the early leader in the rear-engine #16 driven by his father decades ago. At the half-way point in the race Tim Arntz took the lead in the Jon Fick #11, and Matt Janisch moved the Mike Osite #81 into second position. When a cracked oil reservoir took Arntz out of the lead with three laps remaining, Janisch and Bill Force Jr swapped the lead before Force gained the upper hand and claimed the victory. Janish, Tom Hindley, Art Lawshe Jr and Arntz rounded out the top five.

Wait... they race these cars?  Yes, they do, albeit under controlled conditions. But even with this and other safety-related rules in place, the drivers are really racing and they’re having a ball doing it. "This was fun!" said Bill Force Jr in victory lane.

Some Vintage Club events are display, only; some are on-track exhibitions, and some – like this one – are turn-the-clock-back races. 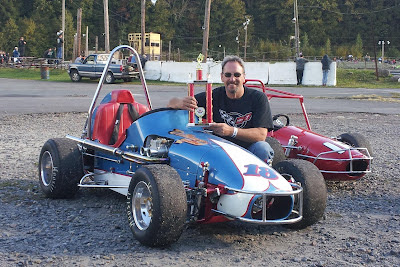 Karl Mondschein kneels between the DeMasco #18 and the Trimble #16
to show off his trophy from Sunday's race.
Did anyone get a photo of Bill Force Jr?  Send it to us here!
Email ThisBlogThis!Share to TwitterShare to FacebookShare to Pinterest
Newer Post Older Post Home
What Does TQ mean? It means three-quarter, as in three-quarter midget.