There is plenty of history in this shot! 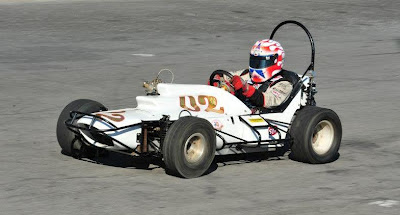 It was taken this past Saturday, at the Oswego Speedway, a track which itself has a long and distinguished history.

The car is the Wehrle "Slingshot" #02, a car which in the hands of driver Tony Romit dominated ATQMRA racing in the early 1970s.  In addition to being distinctive in accomplishment and appearance, the car has some very innovative features, including twin front axles that give it a longer wheelbase on the right than on the left.

It is a car that caused all other competitors to raise their game.

Then there is the driver in this photo.  It is Joe Payne, Jr., who has a stellar record not only in TQ racing, but in NEMA midgets and in the supermodifieds at Oswego.  As noted in the post below this one, Joey has elected to step back from racing at Oswego next year in order to be able to spend more time with his family in New Jersey.  But what a way to say au revoir!