The Vintage Club was proud to be a part of the Budweiser Classic at the famed Oswego Speedway on September 1st. "The Classic" has a history that stretches back many decades, and this year’s event included putting the spotlight on the racing career of Joe Payne Sr and by extension, the entire Payne family.

That Joe Payne Jr went out and won the modern ATQMRA Midget portion of the program was only icing on the cake. 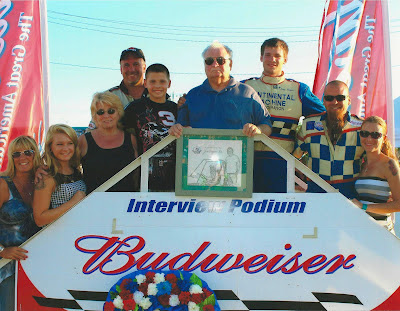 Honoree Joe Payne Sr was lauded for his long and successful career in racing, and he spoke of his early days at Pine Brook Stadium. "We started at Pine Brook in 1971 with a car I copied from Fletcher Fish," Payne said. Fish was one of the pioneering car owners of the early ATQMRA. Payne continued, "Past champion Joe Kidd ran the car for us and we've been at it ever since."

Joe Payne Sr is rightfully proud of his accomplishments as a car owners but was quick to talk of his great racing family. "Racing has kept my family together for many years, it's our way of life," Payne said. "I am so proud of my boys, they have become great racers, but more importantly the have become great people." Payne was joined at the track for this event by his family, including his wife, Betty.

With the accolades Payne also received a pen-and-ink rendering of himself standing next to his first TQ with Kidd at the wheel, prepared by Bill Force. "This brings back so many found memories," Payne said. "I am so grateful for the people I have been surrounded by in racing."

Joe Payne Jr, known to most as Joey, was equally touched by the proceedings. "I am so proud of my father, my family, such a special night." Joey, teary eyed, continued, " I have chosen to step back from running full time here at Oswego and spend more time with my family." Joey’s decision is understandable, despite his considerable racing success at Oswego, because the track is 280 one-way miles from his home in New Jersey.

When the cars of the Vintage Club took to the Oswego track for demonstration runs, Joe Payne Sr saw his two sons, Joey and John, and his grandson Joe Payne III among the drivers in the gleaming vintage machines.

Vintage Club VP Tom Berry proclaimed it "another fantastic event for the club," and went on to say that " we are looking forward to returning again to the big O."