There is a lot going on in this photo, taken at New Egypt Speedway in 1974. 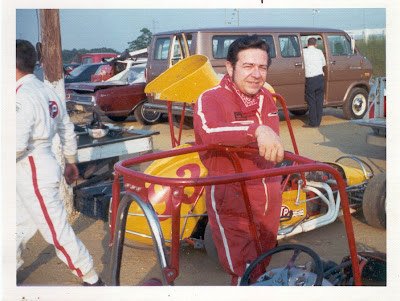 First, the gentleman smiling for the camera is Phil Sousa, whose full name was John Philip Sousa, same as the world-famous composer whose marches are icons of American music. If you attended the TQ races at Pine Brook in the years 1962-64, Sousa marches were what played on the P.A. system prior to the start of each racing program.  Yet today, thanks to the Sousa's Liberty Bell march being used as the theme music, most people think of Monty Python's Flying Circus when they hear a Sousa march.

Second, the yellow #93 is the Jim Barclay machine, prior to its purchase by Jack Becker. The car was only recently acquired by Bobby Barclay, Jim’s son, who plans to restore it to the configuration in which it appears here. And yes, that is Jim Barclay strolling out of the shot at left.

Next, in the background is the Ford Econoline van in which Wilfred and John Wehrle transported the distinctive #02 that was driven with so much success by Tony Romit. That’s Wif Wehrle at the door of the van with his back to the camera, and that’s Tony Romit’s helmet on the table seen between Jim Barclay and the #93.

The Wehrle #02 is today a staple of Vintage Club events.

Finally, just past the Wehrle van is a maroon Buick, which is the car with which John Little towed the trailer carrying his #73. This Buick towed both the conventional upright TQ that John campaigned prior to the construction of the unique roadster with which he and driver Jack Bertling won the 1973 championship, and that championship-winning car as well. That car is the subject of the post below this one.