The 1973 ATQMRA championship winning car, which by coincidence was numbered 73, was located earlier this year in Arizona, and it has has been purchased by Pine Brook TQ veteran and current TSRS Sprint competitor Bruce Kindberg, owner of Bruce’s Speed Shop on Route 46 in Rockaway, New Jersey. 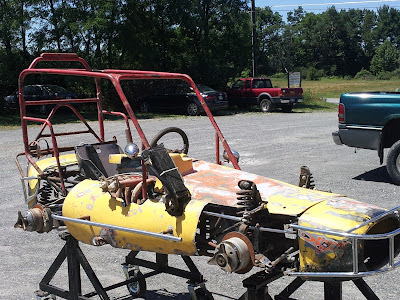 In Arizona, the historic car had been acquired by a church whose members had no idea what it was but thought that they could make it into a kart-like "fun car" for their youngsters. Fortunately this didn't happen and the car appears to be fairly complete and ready for restoration.

Original owner John Little and original driver Jack Bertling will assist in the restoration and the hope is to have the car ready for the annual "Motorsports" show in Pennsylvania this winter – exactly 40 years after the car made its debut and raced to the season-long championship.
Email ThisBlogThis!Share to TwitterShare to FacebookShare to Pinterest
Newer Post Older Post Home
What Does TQ mean? It means three-quarter, as in three-quarter midget.