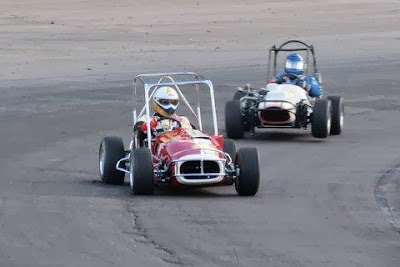 Rogers went on to win this race and as you can see he is leaning on the car, it’s in a slight drift and he’s got just a little opposite lock dialed in.  Fornoro is hard after him, lifting the inside front just as Tony Romit did all those years ago.  (You don't think guys like Hank and Drew are just going to cruise around, do you?)

This particular race was for the four-cycle cars, and both of these machines are powered by Crosley engines.  A separate race for the two-strokes was captured by Tom Arntz, Jr.