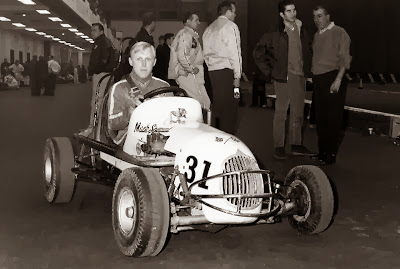 Earnshaw never made much of a splash in his limited appearances with the ATQMRA, but he most certainly made up for it when racing the ARDC midgets:  He became a four-time ARDC champion, winning the series title in 1973-74-75 and once more in 1980.  Earnshaw remains a highly respected member of the racing community today, some 30+ years after his retirement from competition.

Rex Green was known to everyone as “Doc,” because he was a physician and the company doctor at Mack Truck in Allentown, Pennsylvania – hence the “Mack Special” on his Crosley-powered car.  He was also one of the nicest gentlemen in racing, one of the guys who makes us miss "the good old days."