Every year we attend the annual Antique Automobile Club of America's Eastern Division Fall Meet, better known to old car enthusiasts simply as "Hershey."  We go every year, and every year we are saddened by the sight of the beautiful Hershey Stadium.  It's still a beautiful arena but today it no longer has the race track on which the ARDC midgets raced in the late 1960s and on which the ATQMRA raced in the early 1980s.

Today only the straightaways of the track remain, turns one and two having been eliminated in favor of a right-angle walkway, and turns three and four occupied by a large stage for concert performances.

The AACA uses the stadium for the race car demonstration runs that accompany the big gathering of the old-car faithful, but the cars can only tiptoe around the walkway and the stage. 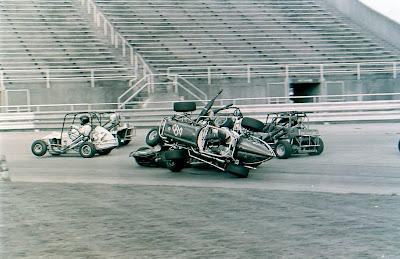 In this photo from the ATQMRA races at Hershey now some 30 years ago, a remarkable seven cars are crammed into a small portion of the otherwise spacious Hershey track.  Click the photo for a larger view, and count cars.  There are eight if you include the tiny tiny piece of one just entering the frame from the right.

Ron Smith is the owner-driver about to test the roll cage on his #48, with two cars trying to occupy the same space beneath his car.  Ron's good friend Bern Bradley is exiting the scene in his own #32.  You guess is as good as mine as to who any of the others are.