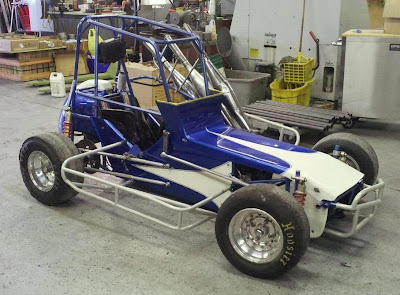 Shown almost ready for its debut with the Vintage Club on May 11 is this car, originally owned by Jerry Morese and now belonging to Tom Arntz, Jr.

Tom has chosen to restore the car not in its original white and red livery and numbered 31, but in the blue and white scheme seen here with the number to be 30.  Think of it as a “continuation” car – Tom’s father drove the blue and white number 30 TQs fielded by George Spafford.

Tom has been racing in the Slingshot class in recent years, but is truly excited about being able to participate with the Vintage Club in just over a week’s time.  Tom’s enthusiasm includes the fact that he will be able to share the track with one of his racing heroes, Stan Ploski, who will be driving with the Vintage Club this year.  Ploski may be most closely associated with dirt track Modifieds, but he has plenty of Sprint car and Midget experience as well.

This car raced -- and won -- at Pine Brook and elsewhere.
Email ThisBlogThis!Share to TwitterShare to FacebookShare to Pinterest
Newer Post Older Post Home
What Does TQ mean? It means three-quarter, as in three-quarter midget.