Here’s Mike Calla, having just pulled off the track at Pine Brook in May, 1969.  (Click the photo for an enlarged view.)  And we are going to draw a line from this moment over 40 years ago to this weekend’s Vintage TQ event at the Mahoning Valley Speedway.  [Posted 7/11/2013] You’ll note in the background two other cars, Pete Falk’s #44 and Vinnie Bing’s #66, neither of which has a roll cage.  That’s because in 1969 Mike Calla’s car was the first and only car with a roll cage.

The cage was a bolt-on affair, removable such that a conventional roll bar would remain.  And at first, there being no mention of roll cages in the ATQMRA rule book, officials directed Calla and his racing partner Bruce Jones to remove the cage.

But 1969 was a sad and controversial year for Eastern racing.  In the ARDC Midgets, Bob Wilkey lost his life as a result of injuries suffered at the Reading Fairgrounds, and Larry Rice was killed in a crash at Islip.  Both men had raced with the ATQMRA, and both fatalities spurred a change in ARDC’s policy which until that point expressly prohibited roll cages.  Cages became an option in ARDC.

In the ATQMRA, Calla and Jones routinely arrived at the track with the cage on their car, and removed it only when told to do so.  Then, at the opening race of the 1970 season, ATQMRA champion Doug Craig arrived with a cage on his championship-winning car.  That was the end of the debate.  Neither he nor Calla nor anyone else was ever asked to remove a cage, and not long thereafter roll cages were made mandatory.

Today it is sometimes hard to believe that the use of an obvious safety device such as a roll cage was ever questioned, but there existed a fundamental objection to them that was perhaps best expressed at the time by veteran driver Jack Duffy: “If you put cages on the cars,” Duffy said at the time, “anybody will drive them.”

But what does all this have to do with this weekend’s Vintage Division event at Mahoning Valley Speedway?  Well, we mentioned that Mike Calla’s partner in his racing venture was Bruce Jones – note the “C & J Special” lettered on the car.  Jones continued to race with the ATQMRA long after Mike Calla stepped out of the cockpit, and Jones drove for many years for car owner Tom Williams.  And Tom Williams will be the Guest of Honor at this weekend’s program.

Tom Williams’ cars, always numbered 9 or 9W, were entered under the “Williams Brothers” name, but despite his brothers’ involvement with the team there was no question that Tom – known to everyone in the pits as Tommy – was the team leader.  The team’s mascot was the cartoon character Speedy Gonzales, and the cars were always immaculately-prepared machines.  At the turn of this century, Tommy Williams became the championship-winning car owner in the ATQMRA.

This Saturday’s event at Mahoning Valley Speedway is another combined program with the modern ATQMRA.  Here’s hoping that things go better than they did last year, when a late-day thunderstorm knocked out the power to the community and curtailed the on-track activities.

And here’s a tip of the hat to Tom Williams, one of the finest gentlemen in racing. 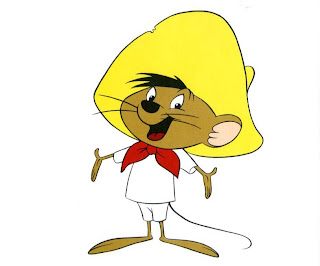