The Flemington Fairgrounds is just a memory today, but at the beginning of the 1972 season the ATQMRA participated in a Sunday afternoon program, one of the very few times that the TQs raced on the square. We can recall just two such events on the track during its long tenure as a dirt surface. (The track was paved for the 1991 season.) 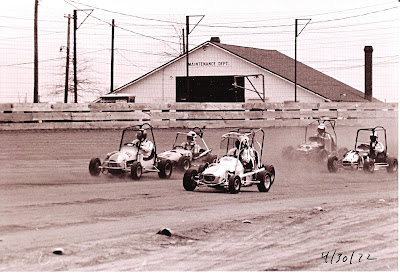 In this photo, Doug Craig’s #55 is the most recognizable, coming up on the outside.  But the other identities are (correct us if we’re wrong by sending an email to us here): Mel Mondschein in the #9, leading this pack by a slim margin over Jim Adams in the #88; an unidentified car obscured behind Mondschein; possibly Drew Fornoro in the Karl Kindberg #10, and Bill Force in his #23 during the period that it sported the “Johnny Lightning” paint scheme.

This is not the lead pack.  Visible in front of Adams is some dust, kicked up by at least one car ahead of this group.

Sadly, today the site of the Flemington Fairgrounds has something in common with the site of the Pine Brook Stadium:  There is a big-box home supply chain store on the property.
Email ThisBlogThis!Share to TwitterShare to FacebookShare to Pinterest
Newer Post Older Post Home
What Does TQ mean? It means three-quarter, as in three-quarter midget.