Four guys with the ATQMRA in common.  This photo, taken at the Pocono Raceway when the IndyCars were there for a test session earlier this year, includes (left to right) Mario Andretti, Ace Lane Jr., Jim Maguire, and Gary Mondschein.  All four of these men raced with the ATQMRA. 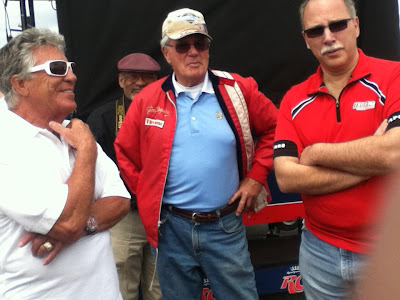 Younger viewers might think of Ace Lane Jr. only as a racing photographer, but he raced with the ATQMRA at Pine Brook, Atlantic City, Grandview (yes, Grandview) and elsewhere.

Gary Mondschein raced with the ATQMRA in the Pine Brook days and extensively with ARDC as well.

Jim Maguire won in TQs, Midgets, and Sprint Cars, and today is an active supporter of the vintage racing.

Mario Andretti also won in TQs, Midgets, and Sprint Cars, along with the 1967 Daytona 500, the 1969 Indy 500, and the 1978 Formula One World Championship.
Email ThisBlogThis!Share to TwitterShare to FacebookShare to Pinterest
Newer Post Older Post Home
What Does TQ mean? It means three-quarter, as in three-quarter midget.